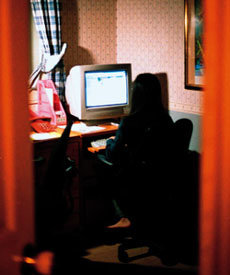 [학생 작문] The media has influenced the world in which we live in. Around us, there are many different movies, magazines, newspapers, and many other things that cause people to become easily swayed to believe in what the “rest of the world” believes [1] in. Everywhere we go, [2] a sexy symbol is put on advertisements. Whether it is people or just the general feel of the advertisement, people have been changing their values. The media that surrounds us today manipulates the values that people [3] believe in today.

First, the media tells [4] the people [5] of the world what types of things [6] are people should or should not buy. [7] In every magazine that a person may look, it shows many famous celebrities wearing “stylish” clothes, or having fun with the latest technology that they can get their hands on. [8] How can the public tell if those items are actually popular? The fact that the celebrities many people look up to [9] have certain [10] items makes the average people [11] want them even more. [12] All of the commercials on T.V. and advertisements that we see in newspapers and magazines today (that are enhancing a product) [13] are all celebrities who seem to be popular among the people. For example, in Korea, there is a clothing brand called Giordano. In the advertisements, the advertisers use [14] hot celebrities; [15] in this case, they used Jun Ji-hyun (a famous Korean actress) [16] for this specific part. In order to [17] make people want to buy their clothes from Giordano, [18] they always have pictures of Jun Ji-hyun [19] looking like she just danced her heart out. From all of the sweat that was dripping from her face and body, she had the sex appeal that appeals to many different people. The women who looked at Jun Ji-hyun in the advertisements probably thought about how they could [20] end up looking just as sexy as her. Therefore, the media [21] determines what items (especially clothing) are “popular” among [22] the celebrities.

Second, the media exposes too much sex and causes many people in the world to [23] become corrupted. In many advertisements [24] that we see, we can see girls taking on a sexy pose with some sweat dripping down their bodies to make them more appealing to both men and women. The men in the advertisements usually have their shirts off and give the camera a sexy smirk, which makes men and women want to buy the item that the advertisements are promoting. With [25] all of the sexual appeal around us, the media can [26] easily corrupt people. Even in movies, it seems [27] like the ratings are becoming a lot less strict. For example, a movie could be rated R in the United States, but in another country (such as Korea) it could be rated 15, which [28] is potentially being rated PG-13. Once a teenager buys a ticket and watches the movie,[29] lots of sex it shown to them on the screen. In the movie The Matrix: Reloaded, there was a scene where Neo and Trinity were having sex. Although the scene may not have been that detailed or shown for a long period of time, the fact [30] that sex could come out in a “teenager” movie shows that sex is becoming more accepted in society. Although many parents and teachers claim that having sex is bad, the media says otherwise. The media seems to inform the public that sex is [31] okay, if not good. After all, [32] many of the things that appeal to the teenagers or even adults are sexually attractive people. There has never been an advertisement where a fat, ugly ordinary person is the star. Most of the time, famous, beautiful, and slim people star in those commercials. The media [33] shows that sex is becoming a trite practice that is slowly becoming widely accepted by people of all ages.

The media influences the different values [34] of people today. In the past, people wanted to save their money and be sure to save enough money for a “rainy day.”(중략)

[Comment] Your essay is very well written. You have supported your argument very well with good examples. From this essay, the only comment that I have to make is that it is best if you don’t use questions. I know that you have probably seen them a lot in text books but when you are writing essays, especially at the university level, professors don’t like them. Again, go back and pay close attention to how I have re-worded your ideas or changed your vocabulary to improve the overall formal tone.